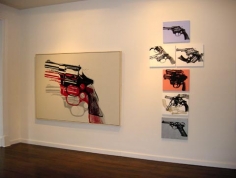 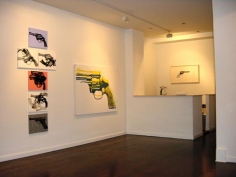 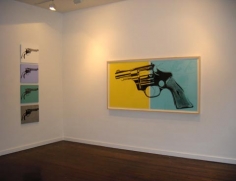 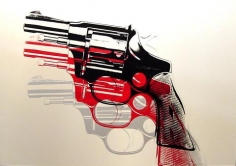 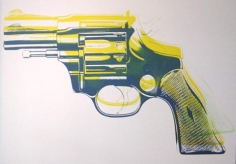 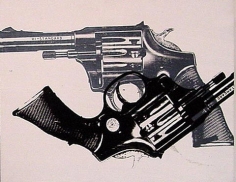 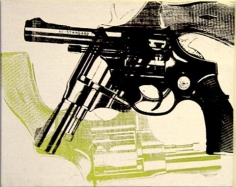 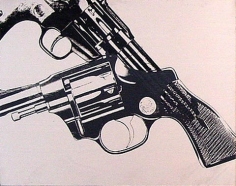 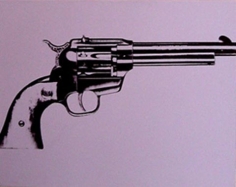 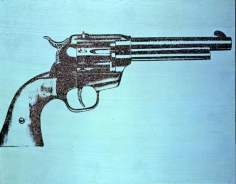 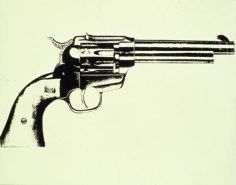 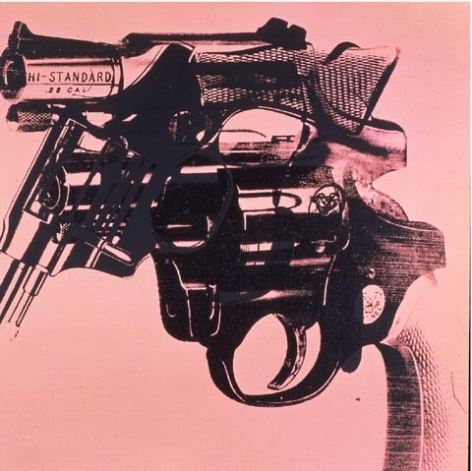 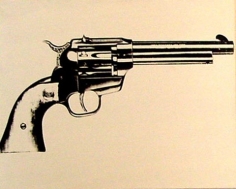 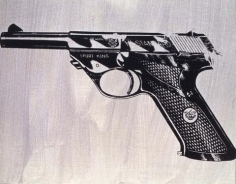 Van de Weghe Fine Art is pleased to announce an exhibition of works from Andy Warhol’s Guns series. Begun in 1981, Warhol first exhibited the Guns with works from his Dollar Sign series at Castelli-Goodman-Solomon the following year. Van de Weghe Fine Art will present a broad range of works from the series – over 15 paintings, including single and serial images, ranging from intimate to monumental in scale, as well as “diamond dust” treatments of the theme, and several unique works on paper.

As Robert Rosenblum has noted, “violence and death, American-style, have always provided a sinister undertow to Warhol’s art”. Along with celebrity and the commodity, this is one of the core themes of Warhol’s work, one that he established early on. Long before his own brush with death when Valerie Solanis shot him at the Factory in June of 1968, Warhol’s Plane Crashes, Suicides, Electric Chairs, Car Crashes, Most Wanted Men, Race Riots, and dead-celebrity portraits of Marilyn Monroe and James Dean illustrated his early preoccupation with the theme. Warhol, in fact, revisited violence and death throughout his career, notably with the Skull works of the ‘70s and the Last Supper series of 1986 as well as, of course, the Guns.

While the Guns clearly reflect upon Warhol’s fascination with violence, death and (Im)mortality, they also point to his obsession with the commodity in American culture. Executed in a graphic style like that of his pop masterworks, these images of handguns and revolvers, some bearing trademarks of “Sentinel” or “Hi-Standard,” become seductive images. Just as Warhol’s Soup Cans and Dollar Bills, emblems of consumer culture in the ‘60s, were abstracted from the prosaic to the aesthetic, the Guns are stark, elegant and eloquent icons, speaking softly of death and disaster.